Killstreaks are powerful rewards earned for racking up consecutive kills. Killstreak rewards have many battlefield applications. Some are offensive, some are defensive, and some can be used in tandem with teammates' killstreak for greater effectiveness.

Ghosts uses the same Strike Chain system that's in Modern Warfare 3. You get to choose one Strike Package: Assault, Support or Specialist and each has its own pros and cons.

The Assault Package is for aggressive players that rewards with killstreaks that hurt the enemy - the downside is that the streak count resets upon death. On the other hand, the Support Package rewards your teammates with support killstreaks and your streak count persists through death. The Specialist Package gives you perks as your streak progresses.

Replaces the UAV as a stationary ground-based version. Sat Coms can be stacked; the more Sat Coms your team has on the ground, the better they work:

The Wiretap perk allows you to stack enemy Sat Coms as your own.

The Intelligent Munitions System shoots anti-personnel grenades in the air when an enemy gets near it.

The Guard Dog will automatically follow you and attack enemies - it also growls when enemy players are near.

Once deployed the Sentry Gun scans for enemies and attacks them on sight.

A remote-controlled missile similar to the Predator Missile from MW3. You can also fire smart drone projectiles while controlling the Trinity Rocket to the ground.

Calls in a Battle Hind that circles the map and automatically engages enemies.

Deploys a low flying drone that attacks enemies and protects your six. 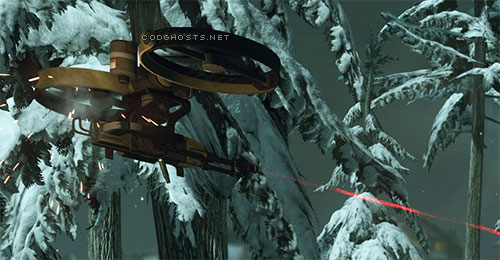 Player controllable quadrotor killstreak that marks targets for detonation. The Gryphon is able to see enemies through walls that don't have the Blind Eye perk equipped. 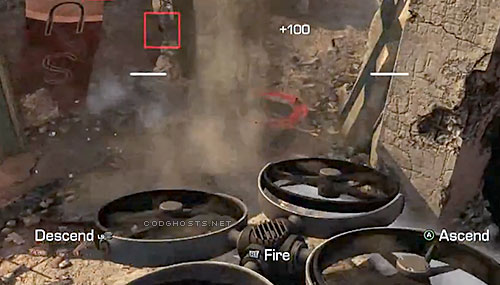 A Care Package is airdropped into the map that holds the killstreak. Once picked up, you get the Juggernaut armor and a throwing knife - nothing more. Unlike the normal Juggernaut killstreak, this version allows you to move extremely fast, but your health doesn't regenerate.

Works just like the Juggernaut killstreak from Modern Warfare 3. The airdropped Care Package contains the Juggernaut armor and a powerful minigun. The Juggernaut returns in Black Ops 3 as an AI controlled G.I. Unit scorestreak. Pretty much all of call of duty black ops 3 multiplayer scorestreaks function like COD: Ghosts' Assault Strike Package.

Allows you to control an AAS-72X Attack Helicopter for a short period of time. The AAS-72X comes with a minigun and flares.

Allows you to access the Loki Satellite and use it to assault the battlefield. You can support your team by launching the following armaments:

Deploys an Ammo Crate that can be used to supply weapons and ammo to your teammates.

Allows you to supply teammates with Ballistic Vests that increases their armor and damage resistance.

Fires a rocket that splits into two - you can free-guide the missiles with the launchers laser. 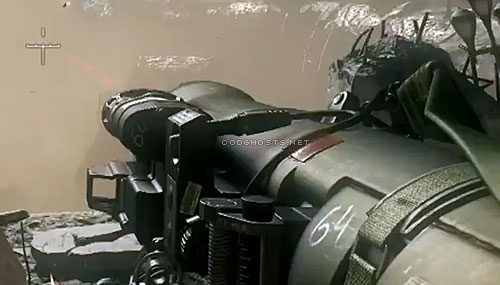 A drone that follows you around. It acts as a motion sensor that detects nearby enemies and also deflects missiles that are fired in your direction.

Even if you die, the Night Owl continues to help teammates.

Spawns an AI controlled teammate that has a Riot Shield and a handgun.

Calls in a fighter jet that engages enemy aircraft.

Calls in a helicopter with a sniper on-board. The sniper is controllable and the helicopter can be ordered to move around the map. The sniper can be taken out, which ends the killstreak.

Uses GPS technology to mark enemies and highlight them through walls. The Blind Eye perk makes players immune to the Oracle. Call of Duty: Advanced Warfare allows players to upgrade the UAV scorestreak to work similar to the Oracle.

Drops in a Juggernaut armor that has a personal radar that pings nearby enemies. The suit also comes with a Riot Shield and a .44 Magnum.

Allows you to remote control the Odin Satellite to support your team by launching the following armaments:

Works almost like in Modern Warfare 3 by allowing you to stack perks as your streak increases. The streak and perk rewards reset upon death.

You get to choose 3 perks and they are activated in the order you choose them. To be activated, each selected perk requires the same amount of kills the perk costs + one. For example, Marathon costs 2 points, which means you'll need 3 kills to activate it.

You also get to choose an additional 8 points worth of perks and they are called the "Specialist Bonus". The bonus is activated 2 kills after the 3rd perk (from above) has been activated, meaning you'll need between 8-17 kills, depending on your perk selection.